This week’s MakeOverMonday was the first time I have used Twitter data. The objective was to rebuild a Buzz Feed depiction of Trump’s retweets. The thing I love about MakeOverMonday is that it pushes me outside of the data sets I use in work – I’m not sure I got everything right this week but because this is my “Tableau play time” I’m going with what I built.

This is the dashboard I ended up with: 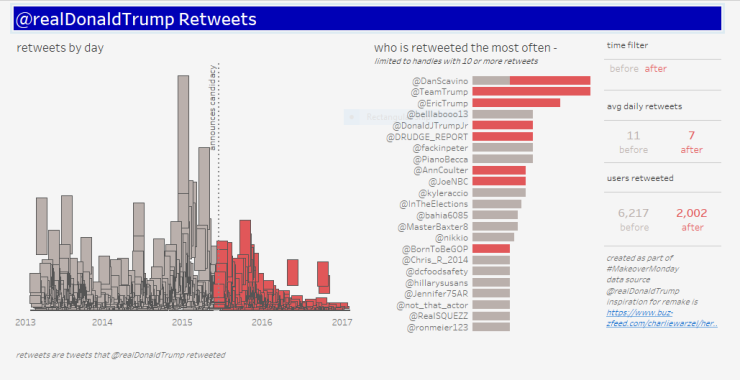 The retweets by day chart is a Gantt chart and I’m not sure that it is the best visualization but I thought it looked like a city skyline and thought that fit into the Trump theme. I think it conveys the point that the number of Tweets Trump is retweeting has decreased since he announced his candidacy in June 2015.

The original data set looked at the users Trump was retweeting and I wanted to keep with that so I created the bar chart that shows the number of times he has retweeted that user with a color coding for before and after. I filtered this to people he retweeted 10 or more times. I thought it was interesting that the only person in his inner circle who met that criteria and who he retweeted before the announcement was @danscavino. I don’t have enough time or information to figure out why that is but I thought it was interesting.

I exceeded the time limit I set for myself this week so I’m going with what I built.